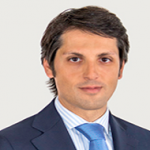 Mr. Sanz has extensive experience in Spanish and international transactions such as mergers and acquisitions, private equity investments, real estate transactions, corporate restructurings and joint ventures in various sectors and industries. He regularly advises Spanish and foreign companies on all aspects of corporate law, and on preparing and negotiating commercial contracts and agreements. He has also advised Spanish and international groups on projects and investments in China, Europe, Latin America and the United States.
He developed part of his career in the United States, working in the firm’s New York office in 2005, and as a foreign associate in the New York office of Skadden, Arps, Slate, Meagher & Flom (2008-2009), and in the Miami office of Holland & Knight (2003-2004).