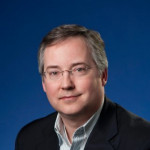 Douglas Fambrough, Ph.D. co-founded Dicerna in 2007 and has served as the Company’s chief executive officer since 2010. Prior to joining Dicerna as CEO, Doug specialized in financing innovative life science technology companies as a general partner with Oxford Bioscience Partners, a Boston-based venture capital firm.

In 2003, Doug and two other investors founded Sirna Therapeutics, a first-generation RNA interference (RNAi) pioneer; he served on Sirna’s Board of Directors until the company was acquired by Merck for $1.1 billion in 2006. Other investments include Solexa, developer of the dominant ultra-high-throughput DNA sequencing platform, acquired by Illumina for $600 million; and Cambrios Technologies, which invented and now markets biologically inspired electronic materials for touch screens and flat panel displays. Before joining Oxford, Doug was a genomic scientist at the Whitehead/MIT Center for Genome Research (now known as the Broad Institute).

Doug graduated from Cornell University and obtained his Ph.D. in genetics at the University of California, Berkeley.